The ongoing Corona pandemic and chip shortage put quite a strain on used car dealers in 2021. However, the slumps are not as severe as many expected.

As measured by the latest figures from the Federal Motor Transport Authority, ownership registrations in Germany have fallen from 7.0 million to 6.7 million compared with the previous year. Accordingly, the German used car market recorded losses of 4.5%. At the same time, there was little change in the market shares of the major auto manufacturers in Germany last year. German used car buyers remained loyal to their brand last year, which meant that there were no changes in the rankings 1 to 6. By a wide margin and despite a decline of around 5%, the most popular car brand in Germany continues to be Volkswagen with 1.4 million new registrations. Mercedes, with 679 T traded used cars in 2021, also has to record a decline of 6.5% compared with the previous year, but remains the first pursuer of Volkswagen. Opel is in third place with 643 T ownership registrations and losses of 4% compared to 2020, followed by BMW with 573 T traded used vehicles and a slight minus of 1.5%. VW subsidiary Audi ranks 5th with 544 T vehicles and experiences a significant decline of 7.5% in 2021. Ford completes the top rankings with 482 T registrations (6.5% less than in 2020). In the race for places 2 to 6 of the most popular German car brands, the competitors are therefore close together. 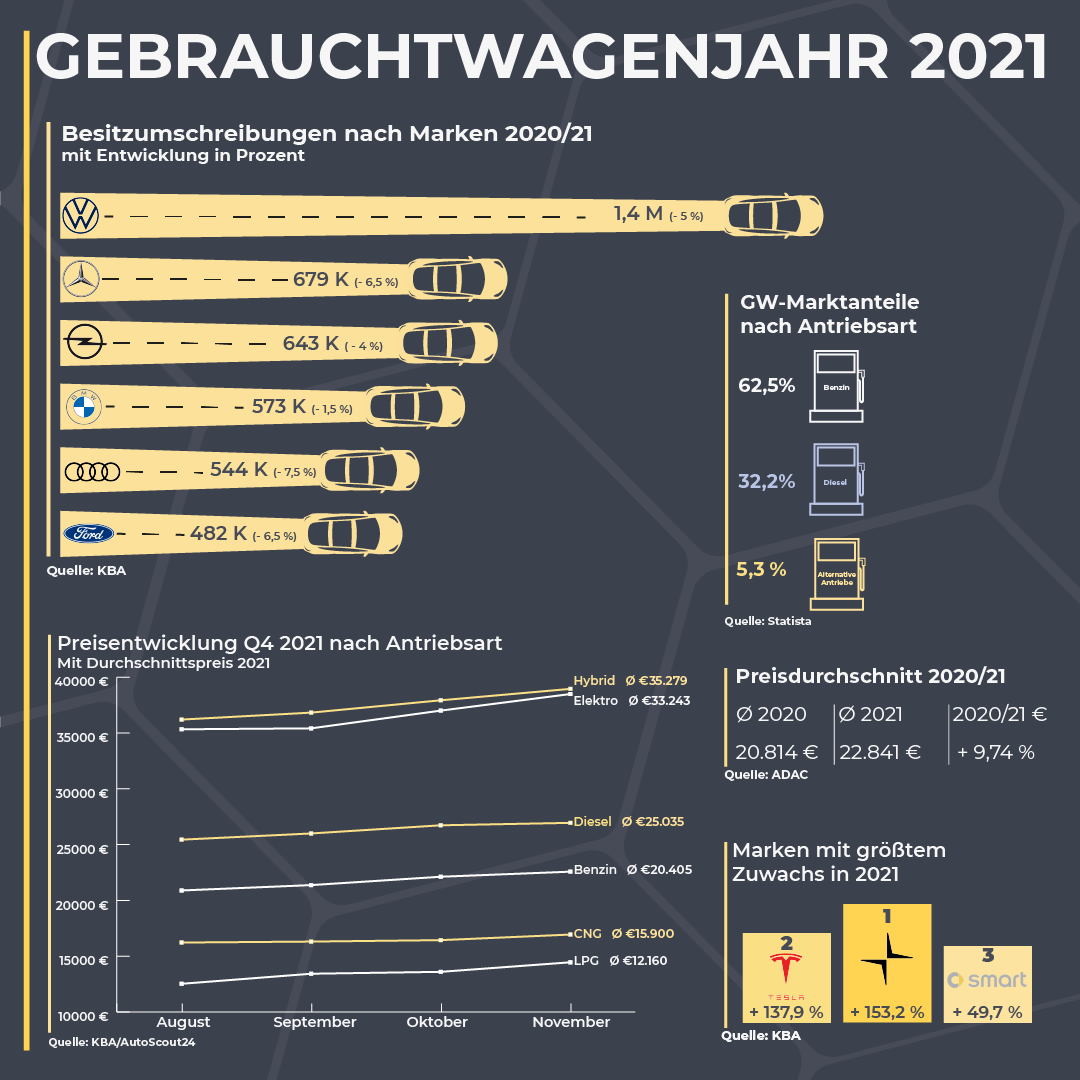 Due to falling supply, prices rise

The prices of the average used car are rising by almost 10% compared to the previous year, according to data from the ADAC in a report from December 2021. Consumers had to pay an average of 22,841 euros for a used car last year. In previous years, the increase in the average price for used cars was still considerably lower. This price trend affected all relevant drive types to roughly the same extent, but it became apparent that used car prices increased significantly, particularly at the end of the year. This rapid price increase was also apparent in a similar form in our neighboring countries. The reasons for this are obvious: due to the Corona crisis and the chip shortage, production of new cars came to a considerable standstill and delivery times are at a record high. At the moment, buyers have to wait up to 14 months for an Audi e-tron to be delivered. As a result, fewer and fewer used cars are coming onto the market, with consumer demand remaining at a constant level.Dealers can currently turn their used cars around at record speed. This can be seen in the figures for current standing times. Compared to January 2021, the standing time of a used car has decreased by 14.6%  in one year. It lies on average with 85.8 days.

The electric car in the used car market further underrepresented

While in the new car market the electrical and/or hybrid vehicle drive arrived long, the new drive types are despite a significant increase in the used car segment also in 2021 still a rather small topic. In the meantime, 43% of all new registrations in Germany are electric or hybrid vehicles. There is a clear trend: new registrations for internal combustion vehicles declined steadily over the course of 2021. Compared with this, the share of new drive types in the used car market is quite low at 5.3%. Around 62.5% of all ownership registrations in the previous year were gasoline-powered vehicles. Diesel-powered vehicles accounted for the remaining 32.2%. Assuming an average holding period of 7 years for new cars, it can be expected that it will take several more years before alternative drives find their way into the used car market.

At the end of 2021, the German Association of Motor Trades and Repairs (ZDK) forecast a gradual turnaround in the used car market. According to its own data, the decline in ownership registrations is not expected to continue in the current year, and a slight increase to 6.8 million ownership registrations is even anticipated. This is partly due to lease returns, which are often retained by customers due to the long delivery times for new cars and do not flow into the used car market. In addition, the ZDK expects a persistently low supply of used cars until mid-2022. Once supply and demand have balanced out again, consumers can expect used car prices to fall.

The used car market is now experiencing a damper for the second year in a row. Despite a decline in ownership registrations, demand for digital solutions for B2B business in Europe is growing steadily. In particular, the changes in warranty law for the sale of used cars to private customers are making B2B business increasingly interesting for dealers. CarOnSale was able to continue its rapid growth in 2021 and nowadays auctions off several hundred vehicles a day.