The year 2020 was a big challenge for everyone and car dealers also had a turbulent year. First, many dealers were affected by dealership and registration office closures, then some used car dealers benefited from increased demand for their own cars.

Figures, Data, Facts: What car dealers need to know about 2020

A look at the 2020 ownership registrations shows Volkswagen continues to be the most sold used car in Germany. Even if the manufacturer from Wolfsburg had to accept a small decline in the amount of 1.7%, VW remains the most popular brand with almost 1.5 million used cars sold in 2020.

Mercedes, on the other hand, despite an increase of just under 1%, does not get past half of VW's registrations. In third place in the registration table is Opel, with 670,000 vehicles and a whopping 10% drop from last year's ownership registrations. BMW and Audi round out the top 5 most popular used cars in Germany, ensuring that only German brands are ranked 1-5. 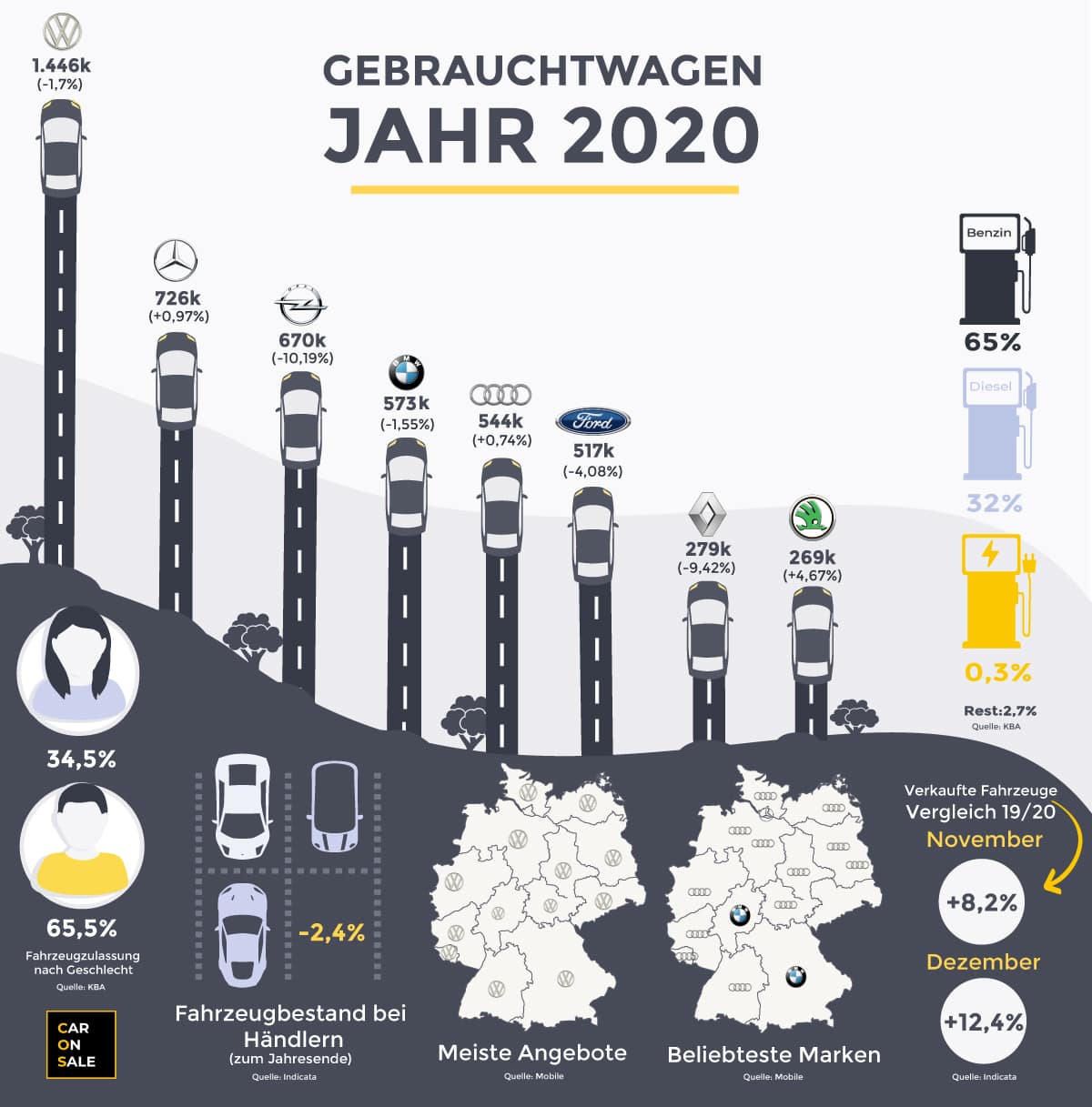 Audi most popular, Volkswagen most common

It's also interesting to look at dealer listings and customer searches. Here, a problem emerges: although most customers search for Audi on mobile.de, Volkswagens are offered most frequently. Only in Bavaria and Hesse are BMW the most popular makes, while in Hamburg Mercedes is searched for most often. In the rest of the country, Audi is the most popular, judging by the searches at mobile.de.

Use car auctions to buy Audi

Dealers should take advantage of this opportunity and buy more Audi. With providers of car auctions, such as CarOnSale, dealers can buy these vehicles cheaply as lease returns, government vehicles or accident cars and resell them to end customers. Here rests in many states still great potential.

Electric vehicles do not yet play a role in used cars

The share of electric vehicles was 0.3% last year. Electric mobility thus plays no role in the used car trade. However, the share of diesel vehicles in all used car sales last year is still relatively constant at 32%. End customers seem to appreciate the cheaper diesel vehicles as an attractive alternative to the gasoline engine.

Much business, which was down in the spring and summer, was postponed but not canceled. A comparison of sales figures with the previous year shows that. Both in November and December, the business of motor vehicle dealers with used cars grew strongly by 8.2% and 12.4%. Vehicle inventory also decreased by an average of 2.4% which indicates successful sales of used vehicles.

The, over 2020, decreased vehicle inventory at dealerships should be restored now to meet the demand after the lockdown. Take advantage, as a used car dealer, of the opportunity through auto auctions, such as CarOnSale, to shop now for the exact vehicles your customers want. Car dealerships should use auctions at the same time to market dealer vehicles nationwide and keep them from becoming slow sellers without effort